Day 37-39 have actually been incredible.

They have been slightly tough – the legs are aching, my feet are re-blistering and my back is sore from the weight of the pack – but boy is Norway one hell of a country.

Around each and every corner I am treated to a new view, the occasional stint in land leading me through golden forests and rolling farmland, then a little later on I break back on to the coast and am met with dramatic sea shapes, huge lumps of rocks and some truly beautiful sections of road.

It really is difficult to find anything to complain about- minus perhaps my own weaknesses, of which, the physical I can accept and the mental I am trying to overcome.

Most of this perceived mental weakness stems from the ‘yeh, but‘ attitude I so confidently claimed I was getting rid of a few weeks back. I constantly question what others will think of what I’m doing as opposed to just getting on with it and enjoying it. Having once again been told off for this by a lot of people, I’m doing my best to shake it again, and even in trying to do so, I am feeling much better.

Day 37 started out slowly – the warmth of the cabin, the easy source of hot coffee and the entertainment of WiFi and a chat with a friend in Asia making me want to stay put that little bit longer. Eventually however I did get moving, and after a quick stop to buy one of the nicest milkshakes I have ever consumed (and some essentials like cooking fuel and biscuits) I left the city, for around 12km of inland shuffling.

I was actually feeling pretty good following the good nights rest and covered this 12km fairly quickly (in my terms) managing to mix up the walking with some running on the downhills. The end of this in land stint was marked with the first of the tunnels I would encounter on my solo road journey. Not particularly phased by the idea of walking through the tunnel, and reassured by the fact it was only around 600m long and I could see the other end – I went for the walking through option – honestly thinking very little of it.

For the first 400m or so everything was fine – the tunnel was very dimly lit, and there was no walkway for pedestrians, but luckily there were also no cars to worry about so far. I even took a selfie to show how enjoyable tunnel walking is… 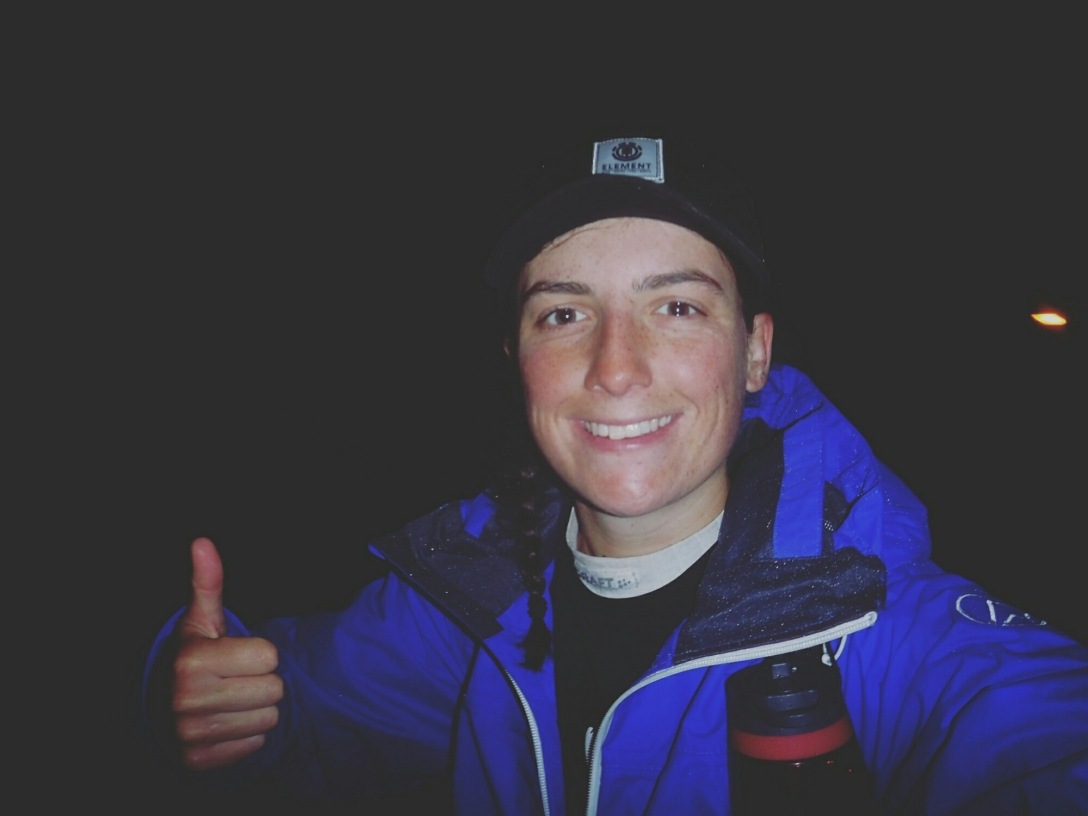 However just a few metres later, in what was the worse timed incident since Draco’s successful completion of the vanishing cabinets, two lorries approached – one from each direction – at the same time. Neither one of which was expecting to encounter a pedestrian, and one of which rather unhelpfully decided that honking his horn would help (it didn’t help and it definitely broke my eardrums). Needless to say I took evasive action, pressing myself against the wall of the tunnel and holding my breath. Needless to say, no more traffic passed during the rest of the tunnel, but I did leave the other side feeling rather shaken. A few moments later I would text Siobhan and mention the possibility of hitching through the next tunnels, though I think in my head I had already made the decision to do so.

Shortly after this horrid tunnel experience, I actually got treated to some of the most spectacular views so far, and ate lunch against a beautiful backdrop. 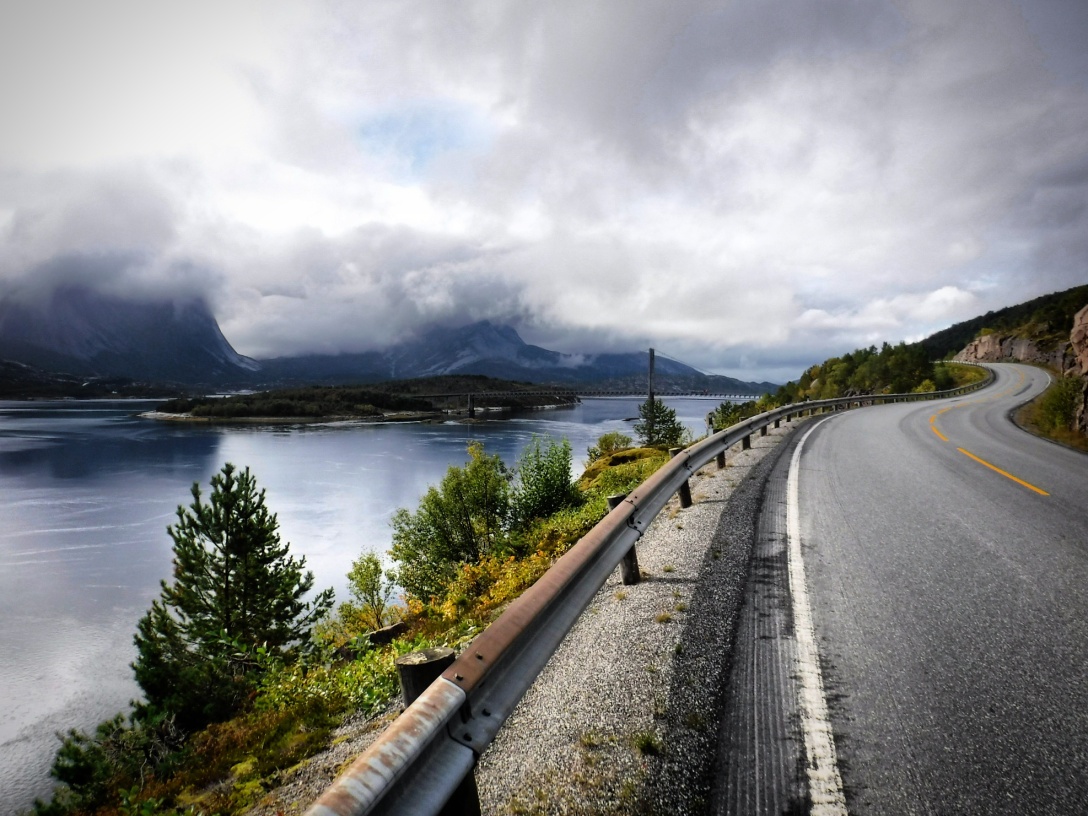 I then pressed on another 15km before being faced by yet more tunnels, these ones quite a lot longer, with less space to walk and to my surprise – some of them also had no lights whatsoever! Having made my decision earlier I decided to stand by it and as I approached the tunnel I eagerly stuck out my thumb and hoped someone would be kind enough to stop.

Luckily enough a few moments later I was climbing into a Volvo  (of course) driven by a Swedish man who works in this area quite often. He was shocked to hear I had already walked through one tunnel, declared I must never do this again, and insisted he took me safely through the upcoming network of tunnels. All in all there was about 20km of road he took me along, 75%of which was tunnelled and 25% gaps in between. As he did so he distracted me from my guilt by talking passionately about the area – pointing out Norway ‘national mountain’ and generally speaking with pride about the scenery. And who could blame him. It was honestly breathtaking.

We also spoke about my challenge, how he’d love to do something similar (but has a wife and children to think about – reminding me that sometimes it’s good to have no ties) and also about the upcoming challenge of a cold winter.

All in all it was an enjoyable little distraction, however when we reached the last tunnel and he pulled up just outside to let me out, after having thanked him profusely for his help and watching him drive off, I suddenly realised I felt enormously guilty. That was a large section I had been taken through – and though earlier I was so sure it was the right decision, suddenly I questioned what people may think.

I started to wander down the road, still fighting the same battle in my head, but eager to find a place to pitch for the night. About 3km down the road a familiar vehicle came back into view – it was my saviour from earlier and he pulled up next to me. Keen to help in any way he could, he presented me with a bag containing a pepper, a huge nectarine, an apple and some chocolate. I physically had to battle a tear as I said thanks again to this complete stranger – feeling moved that someone could be so considerate and caring. With a heavy heart I said goodbye again and set to finding a place to pitch- finding a great spot just 1km later on a hill overlooking Kjøpsvik. It had been a fairly draining day and I went to sleep that night with a guilty conscience and very achey legs.

This morning I woke and I made a decision to stop feeling guilty about the tunnels. Firstly what’s done is done and I had no intention of going back to try again. Secondly, this is a safety decision borne out of necessity and it doesn’t matter if some people want to criticise – at least I am still alive to listen to their criticism. I have decided to learn to embrace hitch hiking the tunnels as part of the trip, and look forward to the people I will meet as I do so. I also can’t imagine it will be easy convincing people to let a smelly, apparently homeless stranger in their car, so I may get a few good stories out of it too.

So now guilt free (ish) I packed everything up and ran down into town, taking some cash out of an atm at the bank (that was for you Debbie 😉) and then boarding a ferry- on foot, very odd – which cost just £5, making it pretty much the cheapest thing in Norway.

The ferry ride was unsurprisingly beautiful, albeit with a bit of a lack of wildlife for my liking, and the coffee and salmon and egg sandwich definitely helped make my morning.

Upon disembarking the ferry, I had but a 15km run down to Innhavet where I would be having a rest day. Needless to say this went pretty fast – my new tootling skills being put to use (running the downhills and walking the ups)  – meaning I covered the 15km in under 2.5 hours – quite some going for post hospital Sophie.

The rest of day 38 and most of 39 (I will be heading off soon to do about 10km) were spent in Innhavet – eating as much as possible, sleeping as much as possible, catching up on this blog and reading Sarah Outen’s book ‘A Dip in the Ocean’ – which is just fantastic. It may have also inspired the dip in the ocean I took this morning – I like to think Sarah would smile upon knowing that her dip in the middle of the ocean inspired me to wade not very gracefully into the Atlantic, squeal with cold and run back out again. To complete I will leave you with some photos – as they say a photo tells 1000 words (and are generally less boring than my rambles…) 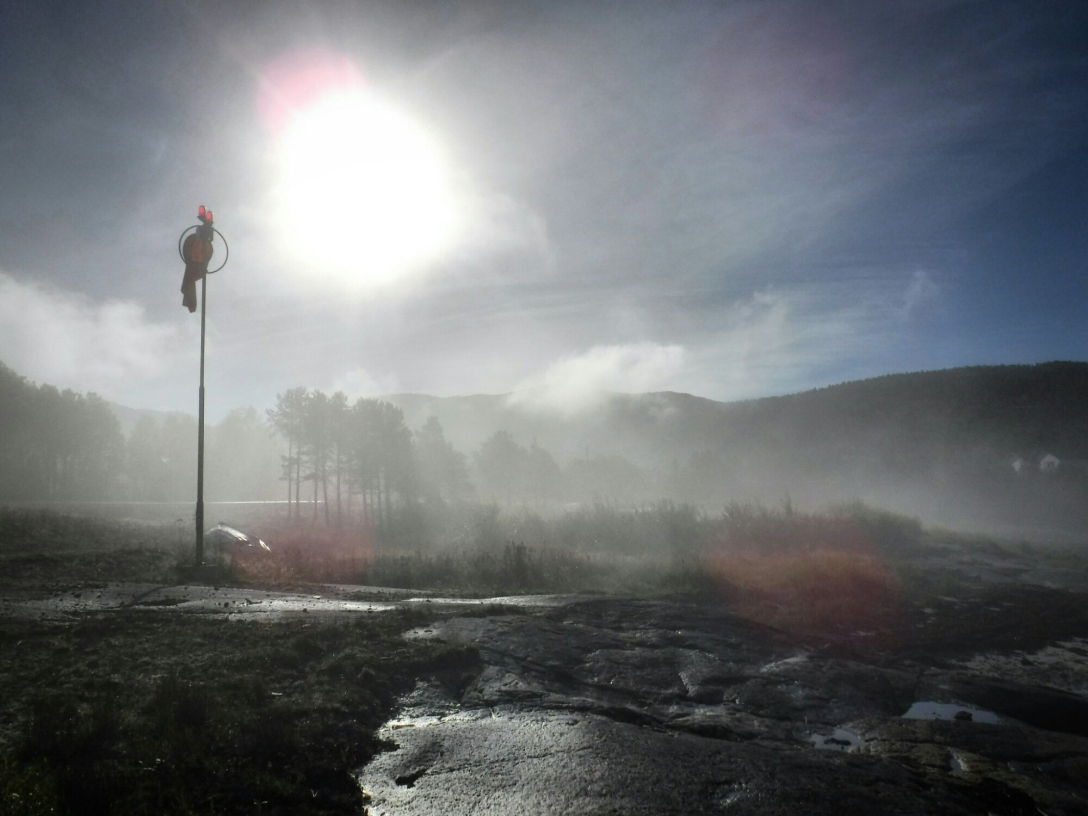 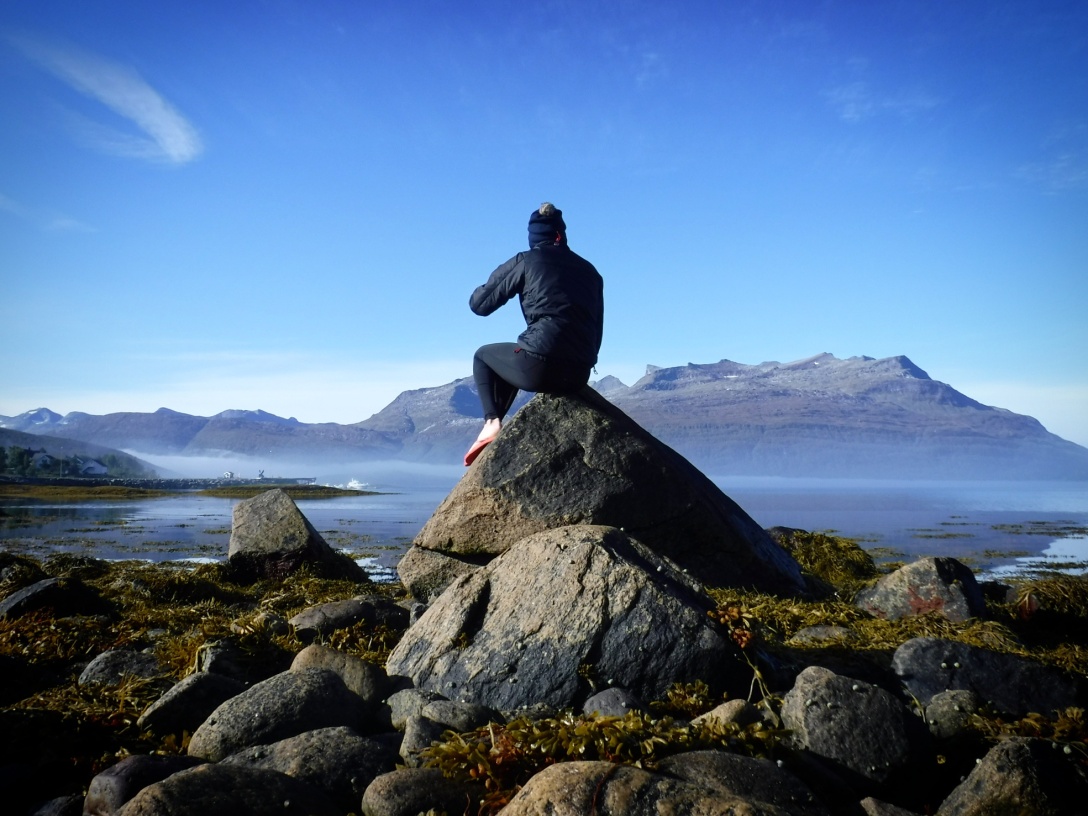 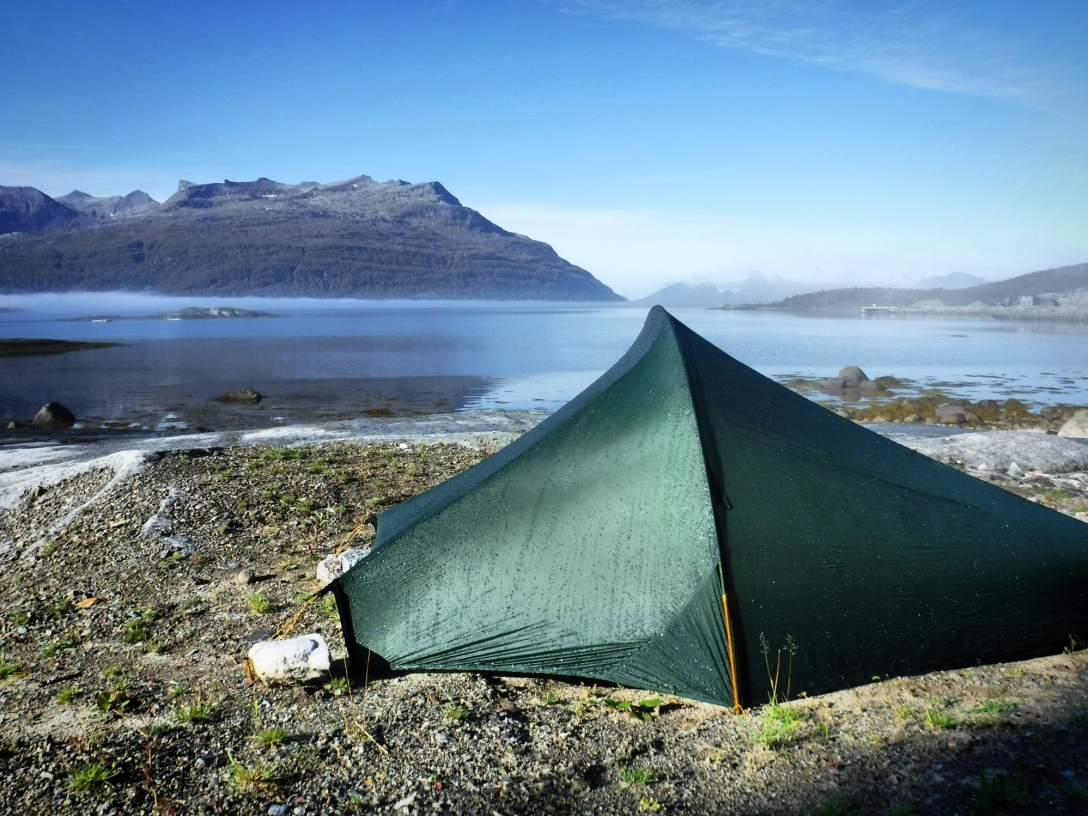 The next five days I hope to get as far south as possible – probably with a stay in a town somewhere between here and Mo I Rana – then a days stay in Mo I Rana, somewhere with a computer, so I can make more detailed plans to Trondheim.

3 thoughts on “Tunnel optimism, tunnel (near) death, tunnel avoidance and slight tunnel guilt. Did I mention there were a few tunnels?”